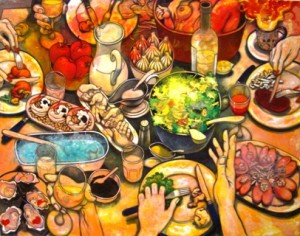 What strikes you first about Fred Cress’s latest exhibition is the richness of colour; pure blacks, pure whites, and every jaundice yellow and bloody red in-between. His large, caricature-like depictions are iconic images of people known to us from society; recognisable, but unidentifiable.

Cress examines sexually-coded bodies and their objectification in two predominant words. In Act One, a woman, tabletop, wearing a red mini-skirt, with one breast exposed, is cheered with lascivious delight by pig-faced suited men. But this ‘male gaze’ is reciprocated in the women of Act Two. The undressing of the tabletop man, nude from waist up, is greeted with carnivorous gnashings of teeth and thirsty arms. The paintings reduce both sexes to the level of beasts. In Cress’s world, men are pigs, women are wolves. And this leads to other works that are less obvious and more disturbing.

In Dog Day, a man and a woman, both blindfolded, are clutching each other, encircled by a pack of violent dogs. The theme of encirclement also carries over into a few of the works on display.

This sense of innate and, by extension, societal primitivism seems to stem, for Cress, from childhood. In Games II we see a taunted child in the middle of an orbiting circle of fiendish children. And everywhere, small people are eaten as hors d’oeuvres; coiled within pull-ring fish tins, pressed inside vases, stubbed out in ashtrays. People feed people. They are consumed and discarded, for appetites sexual, violent, political, or simply gastronomic.

Heavily influenced by Goya, Cress’s work is striking, disturbing, caricaturish. Like Goya, he has the same dark vision, painting the unspeakable, but he tempers this with humour.

The Council forgoes subtlety and makes an eminently related comment on carnality and politics. A bald, suited fiend plunges his hand down a woman’s blouse, amusing the snickering males surrounding them. Sidled in the corners, these politicians bask in the same icteric green light found in sewers and underground railways. Yet the woman here does not appear to be disempowered. She is seated in front of an open box. What is inside this box is not revealed, but some competing interest is suggested, some leverage.

Fred Cress is a fine artist who has worked prolifically since his first exhibition in 1965. Born in Poona, India, in 1938, it’s hard not to see the influence such early images would have had; the colour, the movement, the swirling throngs of people, the manic battleground for survival. From an abstractionist background, Cress’s pivotal decision to turn to figuration and narrative works has seen him win the Archibald Prize in 1988 for his portrait of fellow artist, John Beard.

The exhibition itself is thoroughly engaging and the serene, sculpture-laden gardens of Kangaroo Valley provide a stark contrast to the subject matter. Through the use of colour, movement, and his peculiar depictions of people, in each picture we get the sense of a story half told. We have walked in at the critical moment. With darkness and humour, the works are instantly accessible, often intriguing, raising many more questions than they answer. And for such a small exhibition, it is powerfully, albeit briefly, contemplative.