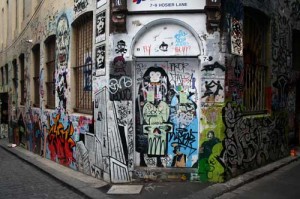 After nearly five years since my last visit, Hosier Lane is almost unrecognisable. A few favourites (like Mum and Gun) are still there, but the lane is now coated in fresh ideas and fresh paint.

Last time, I had to shoot covertly, wore a coat, scarf, and backpacking, and was looking over my shoulder the whole time. The thrill of the shoot! This time, there was a group of school kids on excursion and an organised explanatory walk for tourists. Times have changed. But the ideas are as fresh and vivid as ever.

Graphic Designer and Street Artist, Deb, has a beautiful Deb-style Ganesh. Her work is also in Union Lane and Fitzroy. There is a load of subversive commentary on hot topics like Julian Assange, Tony Abbot, free speech and religion.

Many people complain about the unsightliness of street art, or the feeling of suppressed violence exuded by lashings of spray paint. Vandalism and graffiti are a disagreeable nuisance and there is no disputing that fact. Defacing private property is simply not cricket.

But to confuse the mindless tagging of roughly scrawled letters with the ornate, beautiful, insightful, hilariously acerbic, is to entirely miss the point.

It’s also to miss the opportunity to engage with the ideas of others you might never speak with in your life. To me it’s a reminder that, in a true democracy, this is a legitimate soapbox for the disenfranchised. And, gee, it’s interesting what they have to say. If these walls could talk… well here they do. It’s fascinating.