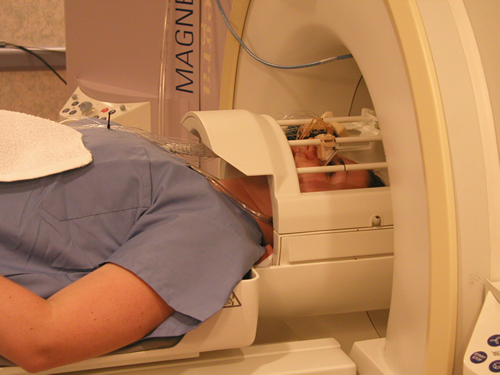 Clad in a tablecloth and fitted with a face cage and helicopter headphones, I am strapped to some vinyl upholstery and remotely rolled into the tube.

The Magnetic Resonance Imaging machine (MRI) is a two-million dollar deep scanner that has the look and presence of a unit more at home in NASA than a Nowra shopfront. As impressive as it looks on the outside is equally proportionate to how uncomfortable it is on the inside.

The ceiling is a couple of centimetres above my face. If it were glass, my breath would be fogging it. Eyes prised shut, I engage in some heavy-duty self-talk. Yes, I can breathe. No, I am not claustrophobic. No, I am not going to have a panic attack today.

The machine kicks into action. Around me there’s a slow-moving orbit of discordant technology – banging and clashing without rhythm. It’s an industrial nightclub in here, so thank goodness for the headphones. Soon there will be relaxing classical music, sweet salvation. When the music starts filtering through the headphones, I realise I’ve been tuned to local radio and will hear an hour of Milli Vanilli, Abba and Rod Stewart.

MS means big money. There are over two-and-a-half million sufferers in the world. Alarmingly, despite all the public awareness and huge amounts of fundraising, diagnosis of the disease is growing by 7 per cent each year. While prognosis for those with the disease are dire, forecasts for business look good. It is a highly profitable segment of the chronic disease market.

Most estimates agreeing the cost of getting a new drug to market is around $1.3 billion. Drug companies are scrambling to find new and better treatments for people with the disease. Clearly, there is a need to recoup the investment, which may explain why drugs focus on managing symptoms rather than researching to find cures. Drug companies don’t make money when people choose to treat themselves by changing their lifestyle. Only one problem. Scientific research consistently suggests that diet plays a major role in determining the course of the disease.

Medical practitioners are fast to take the orthodox approach to their patients with MS – get on medication and quickly. When people are first diagnosed, it is recommended that they start a course of medications straight away and to stay on them long-term, changing at certain milestones during through the disease progression.

MS is the most common chronic neurological disease in the world. According to MS Australia, Multiple Sclerosis affects around 23,000 Australians and three times more women than men. The average age of onset is 30, the cause is unknown and there is no cure.

“There are not many diseases that affect fairly young people where so little is known about the disease,” says Professor Anne-Louise Ponsonby, Environmental and Genetic Epidemiologist at Murdoch Children’s Hospital.

“Although we don’t understand the causes of MS we do have some components of the jigsaw puzzle.”

The name of the disease translates as a description of the symptoms: hardening of the tissue or multiple scars. In a case of profound miscommunication, the immune system, our protector, attacks the central nervous system, mistaking the myelin sheaths that wrap around our nerves as a kind of virus.

Myelin is a fatty insulation around our ten trillion nerves. It protects them and enables fast and accurate transmission of nerve signals. When demyelination occurs as a result of an MS attack, affects the transmission of messages, either slowing them or interrupting them completely.

What this actually feels like could include burning sensations, numbness, ‘pins and needles’, pain, lack of balance or co-ordination, and visual problems including blindness. At times my skin feels as if it is healing from bad sunburn. I’ve had the sensation that my jeans were wet, but only on one side. And on that side, stray water droplets that spit from the sides of a showerhead can be like the sparks off a blowtorch—much like sciatica feels.

The Case of Copaxone™

One of the more recent MS drugs, glatiramer acetate, is the generic name for Copaxone™ and is made by Teva Pharmaceuticals. It is commonly prescribed for people with relapsing-remitting conditions, the most common and the usual precursor to more serious debilitation. In Australia, the drug costs over $1,000 for one month’s prescription, most of which is borne by the Pharmaceutical Benefits Scheme.

In 2011, not long after it was released, Teva was warned by the United States’ Food & Drug Administration (FDA) for making false and misleading product claims.

Amongst the FDA’s ten pages of the criticisms was the claim that the drug improved the long-term outlook of those on the medication. The study had commenced with 231 self-selected participants. After 15 years, the conclusions were drawn based on the 100 that remained in the study. No follow-up with the missing 131 participants was mentioned in Teva’s submission and could have substantially skewed its results. This is the Copaxone Warning Letter

At the same time that big pharma chases the next treatment and organisations like the MS Research Association (MSRA) conduct studies looking for the cause and cure of MS, a wave of medical practitioners and scientists are taking a different approach. By examining past medical literature, nutrition and biology, they are individually putting forward proposals that are as simple as what – and what not – to eat. In so doing, they are busting a few long-held pieces of marketing propaganda along the way.

“As much as 95% of this disease can be controlled by diet,” writes Professor George Jelinek’s in his book Overcoming Multiple Sclerosis, which is the result of a research odyssey after his own diagnosis.

Among the sacrificial food myths is dairy. Long-held for its high calcium properties, dairy is thought to be a likely suspect in the case of MS attacks. Further, other scientists purport that linking dairy milk’s calcium content to a reduced risk of osteoporosis is a very long bow to draw.

The New Medical website cites a number of research articles when it states that dairy is “the biggest dietary cause of osteoporosis because more than any other food it depletes the finite reserve of bone-making cells in the body.”

Dairy is an animal protein. All animal protein elevates the acidity of the body’s PH which causes it to seek a neutralising agent, such as calcium. While the milk may cause calcium in the short term, in the long term, this calcium will be sought from a person’s bones.

For MS sufferers, Jelinek cites mounting evidence that cow’s milk mimics myelin oligodendocyte glycoprotein. This is the part of myelin that is mistaken for a virus and thought to trigger an MS episode given the presence of other genetic and environmental factors.

Jelinek’s diet is a modification of that described by Professor Roy Swank after his long-term study of MS patients. Swank’s treatment and research began in the early 1940s and spanned 34 years, with a further follow-up study at 50 years. Those who kept to the rigorous diet that excluded red meat and consisted of 15 grams of fat or less per day were found to have had very little if any disease progression.

The Swank diet is considered by many to be the most effective treatment for multiple sclerosis recorded to date based on clinical evidence, but his research is little known. Swank’s study has been largely ignored by the medical orthodoxy as it doesn’t meet modern clinical research standards – an irony given the recent FDA criticism of Copaxone™.

Clinical Professor of Medicine at the University of Iowa, Dr Terry Wahls, also broke ranks when she found that the best disease-modifying drugs available were having no impact on her disease progression.

“Physicians like myself were very much in love with drugs, diets and devices and we knew very little about nutrition or how to create real health,” she says in a video for Ancestral Health Symposium.

“In medical school I had to memorise countless reactions involving my mitochondria. What I didn’t learn and wasn’t taught were what substrates my cells could make and what substrates I had to eat for those reactions to happen properly,” says Wahls. “To repair myelin, what your brain needs is vitamin B1, which is thiamine, B9, which is folate, B12, which is cobalamin, omega-3 fatty acids… and iodine.”

Wahls had become so disabled she was unable to sit in a chair and conducted her research into multiple sclerosis and similar diseases from her zero-gravity, tilt-recline wheelchair. Now fully mobile, Wahls campaigns heavily to promote a “modern day hunter gatherer” diet that avoids dairy, gluten, most oils, processed food and grains, and advocates consuming nine servings of vegetables each day. She has also begun clinical trials of her recommendations, which are showing positive early results.

Retired Neurosurgeon Dr Rudolph Cartwright in the United States also “researched like a mad man” when he discovered his daughter-in-law had been diagnosed with MS. His mshealthcoach.com/blog is full of stories from people who have gone from severe disability to being able to climb stairs unaided. For a medical practitioner, he has little to say about the pharmaceuticals on offer, other than to highlight their ineffectiveness without drastic dietary changes.

I have had MS for fifteen years. Having random elements of disability on an unpredictable basis is not really my thing. Playing the sympathy card doesn’t interest me either. I grew up with a stressed GP for a father and my first big word was hypochondriac.

My first MS attack was severe and immediately followed two weeks of army officer training. There were pins and needles running through my hands and tight bands of tingles around my thighs and chest. I felt like I was wearing a corset that was plugged into something electrical. If I tipped my head forward, a jolt of electricity would shoot down my neck and finish by buzzing in my fingers.

The cause of these sensations all seemed obvious enough. I had repeatedly thrown myself into the ground, dragged myself over rocks, been sleep deprived and in extreme heat. I didn’t worry about it. The cuts and scratches were my emblems of war. I was proud of them. The bruises would fade and so would the tingling. Six months later, it was still there.

Researching this article I found countless YouTube videos from MS sufferers like me. People talk about the drugs they are taking, the emotional rollercoaster, their breakthroughs, depression, family impacts, frustration and surrender. Their experiences resonate.

There are many people who say they have benefitted from certain drugs, either partly or dramatically. There are also loads that also claim for whatever reason to have recovered. Personally, I took subcutaneous injections of Copaxone™ every day for eighteen months and had more attacks on it than off. Now I take nothing. Other people say it has helped them a lot. Each case is different.

I have always been vegetarian so maybe that helps keep my symptom-free. Maybe not. It may simply provide its own kind of placebo or sense of control.

Many people, including Wahls and Jelinek, talk about the mind-body connection and the importance of daily meditation.

Wahls said her experience of having secondary progressive MS and being profoundly disabled was, “the most profound gift I have ever received.”

Professor Jelinek says, “MS can be a good excuse to begin a more profound inner exploration and journey.”

On an MRI scan, the small lesions from a multiple sclerosis attack look like fingerprints. They are bright white smudges on the dark grey brain matter. When I first saw my scans, I was shocked. I thought I saw a hand print – that someone had touched the prints before they were dry. Perhaps they did – in utero or wherever. If so, it’s a guiding hand that directs me to lead a life health, meaning and calm. It’s that which makes having MS a blessing much more than a curse.