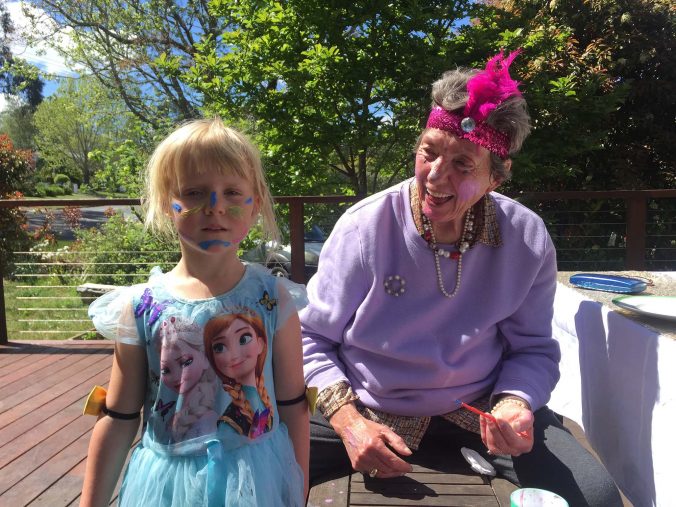 Walks with Margaret and Jonty

Twelve years ago I bought a little cottage in a village far away from everyone. Margaret was a near neighbor. She was the first person to knock on the door and welcome me.

Margaret walked her dog—Katie at the time, later Jonty—past the house every morning at eight and every afternoon at four.

Her birthday was October 26th. I remembered because mine was March 26th. This made me seven months older. Or 33 years and five months younger depending on how you looked at it.

Marg knew how to compost, what plants needed what, what color bin to leave out. We respected each other’s privacy but left signals. A package on the rocking chair. A flower in the letterbox.

When I married and we had our children, Margaret loved them. We would all rush out to say hi when we heard the jangle of Jonty’s collar coming past. I thought they could be annoying to her, but Margaret seemed to delight in their little conversations. She always got them something for their birthdays, or for any reason. A huge unicorn. A plush green crocodile. A snuggly blue whale.

Halloween was met with disinterest by us. But Margaret gave us lollies to distribute to door-knocking kids. Easter’s approach meant bags of chocolate eggs at the doorstep. Before Christmas last year, Margaret got us a small painted Santa with directions for the reindeer to our front door.

Our four-year-old daughter, Susie, was enchanted by Margaret and Jonty. Susie made her an invitation to have a morning tea. The two of them had little sandwiches and cakes on the deck. They painted each other’s faces and arms and dressed in pink tiaras and pearls.

Months melted into bushfire smoke. There were evacuations and then blessed rain. The lushness of the village came back and we all exhaled.

A coronavirus was spreading. Then some very bad news. We talked about mental health, food, drinking, friendships. We hugged, rubbed each other’s arms, shed tears.

After a few months of chemotherapy, Margaret asked me to start walking Jonty.

At first, we walked together, for a hundred meters or so. She held onto my arm. We commented on the sunshine, the dew, what the day would bring. Then we turned home, and I kept going, getting brisker for Jonty.

Our morning walks were Jonty-directed tours. Past the chicken house. Past Opal the goat. Into the shafts of sunlight.

Coronavirus was rippling around us. People were self-isolating. A preponderance of unfamiliar faces, and their dogs, began appearing?—?escapees from the city.

Jonty’s breed was called a wire-haired Jack Russell, but he was soft. A woman once called him a ‘fluffy jack.’ I thought that would make a nice nickname. Fluffy Jack. But actually, he already had three other nicknames.

Jonty was Monsieur Jolimont, the suave and popular. Welcome to the Doggerwood! With snout to tail he would determine. Are you a woofee? Or a woofette?

We traipsed along the avenues of maples. Hedges of photinia. An interesting half-hidden Zen garden.

The roots of every tree, and often single blades of grass, were carefully examined. Jonty was Captain Sniff. There were signals everywhere. He gathered the intelligence. Wooki has been here. Ralphie was there last night. The age, the breed, the sex, and what they’d had for dinner, all information carefully cataloged.

Then out came Mister Wizzle. After cataloging, it was time to mark the area with a stamp. Signal detected. Pssss.

The schools were closed. And the shops. We were told to stay home unless exercising. We were. It was not Tuesdays with Morrie, it was Twice Daily with Margaret and Jonty.

Every morning I called in at eight. Every afternoon at four. Summer had cooled off and turned to autumn. La Belle Epoque. We blew frosties in the mornings. The light streamed gold and orange in the afternoon. First frost was early in May. Every day had a crystalline beauty?—?and the sense that everything is precious and ephemeral.

In the mornings Margaret was often up for a chat. At times it would be half an hour before I’d set off, Jonty wrapped in his blanketed coat, raring to go. She listened to BBC News. We’d talk about democracy, what good was it if people voted against their own interests. She had philosophical reflections. Later, devout mindfulness of the subtleties of the sky, the clouds, the sunlight. Some mornings, the joy of a cappuccino.

In the final weeks she transformed. Her face was sunken. I could feel her bones under her jumpers and tracksuit pants. She hobbled around to the door or sat in her chair all day. Afternoons she was often brief and cordial. She was in pain or highly medicated. I could tell she was embarrassed that her green eyes were pinned and glazed.

The pact was that I would help her stay at home for as long as she could. Unpegging washing, folding shirts, tracksuit pants, cardigans. Putting on a fresh doona cover in the spare room for a friend who would never come.

When I last saw her, it was in hospital. She was Old Margaret, the Old Marg we’d chuckle with over the fence. Her cheeks were fleshy again. Without the dog or the kids, we would talk. We held hands and laughed, plucked a pesky dangling hand towel out of her view.

My hands are always cold, so she warmed them up. She was in New York when Nixon resigned. She gave an impression of what she used to say on the plane loudspeaker, “Good morning, ladies and gentlemen.” There was my gracious, well-mannered host. It was amazing how many people got on the wrong plane. She had worked around Connecticut in Camp America, lost in translation to Australians who thought that meant something else.

I barely remember what we spoke about but it was trivial. Meaningfully trivial She said she’d asked too much. I said no she hadn’t. The virus restrictions were to be eased the next day.

She ushered me home after an hour, because it was getting dark. She sincerely and solemnly asked me to drive carefully to get home safe to the children. Dusk is dangerous with all the animals on the road. I didn’t shake it off. I looked into her eyes, squeezed her hand, and promised I would drive safely. And that I would see her again tomorrow afternoon. With a colorful picture, by Susie, for her wall. She died in her sleep that night.

Margaret had the grace and good manners of another era. She was unfailingly kind. She never spoke badly of anyone, was always concerned about others ahead of herself. She was more family than family.

Margaret was well-traveled and had lived an interesting life. She had international awareness and the quick wit needed for the day. She listened to the BBC and knew about the psilocybin trials. I learned a few pieces of her history, but only ever skimmed the surface. It didn’t matter. We connected.

I’m an introspective person with a lot in my head and heart but not a lot to say. Margaret often managed to bring it out. While I had settled somewhere far away from family, she had brought family to me.

Rest in peace, my friend. I carry you in my heart.