Why is My Son Obsessed with Trains?

The one question parents of train-obsessed children should ask themselves

To be honest, it was embarrassing. His first words were ‘Choo Choo’. Then, they were his only words.

Choo for yes. Choo for no.

Choo for happy, sad, don’t know, and I love you.

Is this familiar to you? If so, you may well ask yourself what the heck is wrong with ma boy?

Lying flat on his stomach. Pushing a  train along a wooden track with his finger. Gazing lovingly into its painted train face. Pouting his perfect cupid’s bow.

Our son sleeps with us. He brings a train to bed every night. He dreams about it —both good dreams and bad. He wakes up laughing at funny things the train did. And ‘train’ is his first word almost every morning.

You’re right. We did assume autism.

So what to do?

Did you hear about the kid who was obsessed with trains?

He had a one-track mind.

The Museum Unlocked the Answer

Somewhere along the line (excuse the pun), we figured we would indulge the obsession. Like how parents used to make kids smoke a whole pack if they were ever caught with one cigarette. We mistakenly believed we could deliver him a sickening amount of trains. He would crave, yearn for an alternative.

So, we had a day trip to our State Rail Museum. In fact, far from the excruciating bore we were expecting, we all had a great time. I’m not saying that sarcastically. The museum actually was interesting.

The red rattlers from my childhood were there. The dark green leatherette upholstery from that service that used to run through Fassifern, they were there too. 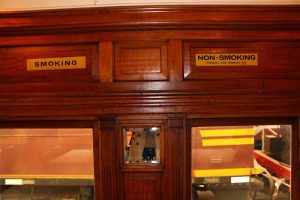 We walked through the old sleeping cars, and into the dining car where there was a bar. I took photos of the smoking and nonsmoking signs just centimetres apart. We boarded the glossy green 3801 steamer. And then it happened.

I realised something. Something that must have been long-suppressed. A memory. Then a flooding cascade of them all came back.

A Love Affair that Impacts Generations

I thought about it.

Why would my son love trains so much. Could it be…me?

All this time and who was I kidding?

Of course, it was my fault. I was the root cause.

I just forgot how much I did. I have Basji to thank.  To remind me.  I have found my soul again.

Trains are the most efficient form of transport in the world. They also have this mysterious and delightful quality, like a magic faraway tree, don’t you think? All you have to do is take one step. Step on. Step off somewhere else. Doors slide shut, you slide to some other place.

As a teenager, I used to secretly play on top of a train tunnel. As a parent, I would faint in horror if Basji ever did what I did then.

As an adult, I rode the Maglev from Shanghai to Pudong and back last year. That 30.5 kilometre stretch took seven minutes. It is the fastest passenger train in the world.

I’ve played him the one-minute video (below) I took of the maglev that shows the streetcars out the window getting faster and faster.

The speed on the green LED lights at the front of the cabin clocking up to 350, 401 then 431 kilometres an hour. The rush and anticipation when we pass a maglev coming the other way. When the combined forces cause a loud slam-bang and all passengers to jump with excitement. What a rush!

I have ridden the shinkansen a few times in Japan from Nagoya to Tokyo and Osaka. (Japan Rail has broken the world-record for speeds at 606 kilometres per hour, however, this is considered unsafe for passengers.)

I have even walked on proposals for high-speed trains in Australia, the only continent in the world without high-speed rail. Research for that job led me to find the JR world record video and get my feet itching for more rail experiences abroad.

Far from suppressing this desire, we feed it. 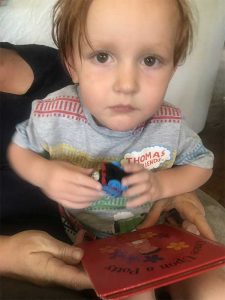 Basji dresses in train clothes and apparel. That includes a yellow handstitched quilted Thomas jacket, and a handmade train-print Covid face masks (yes, from the same person). Aye, there are train pyjamas. And train pants, and iron-on transfer cardigans and T-shirts.

My boy has cutlery with trains. A melamine drinking cup, plate, bowl with trains. And, of course, there may be the odd toy train. Rather, our tiny cottage is bursting at its pre-building code cracks with toy trains.

We have not only one set of every train commonly available. Friends and family unwittingly duplicate because what do you get the boy who has every train? Another train.

He only likes train-related programs so we began watching Blippi and we all know the train song very well indeed. We harmonise. We annoy the kids with the frequency and fervour of our attempts to get the words right, and from a variety of pitches.

Every day, we watch trains every day. Sometimes we wait for an hour and a half,  waiting for the Pacific National to roar past. Or, holy of holies, the XPT!

Of course, the drivers and train guards all know us. Seeing our pleasure makes their day. You can tell.

We wave. They wave back.  We are like celebrities.

His obsession is most acute with steam trains. Yes, like Thomas the Tank Engine. We have watched Gecko’s educational steam train video about 27 times. You know what? I now know a lot about trains.

Let’s not forget the California Skunk by Neil Armstrong — a masterpiece of home cinema.

The Question for Parents of Train-Obsessed Toddlers

If your boy or girl is a train lover, they’re onto a good thing.

So this is my question. Why aren’t you?

Let me put it this way.

Trains are not only loud and exciting. They are enchanting. Not just for your kid, but for you.

We live in a little cottage in a tiny village. All we have to do to get anywhere in the entire wide world is to walk about four minutes to our train platform and take one step. One step onto a train. With connections to other trains and planes, boats and buses, we can get literally anywhere in the world.

Isn’t that wonderful! Are you on board with this?

Not that you need to go on a massive excursion. How about another city!

Try this to start

The grand old XPT to Sydney and Canberra and it is as fine as any first-class Concord.

We pack a lunchbox full of nuts, fruit, popcorn, bikkies, water bottles, and books. We also take our New Yorkers and Economist magazines and an iPad. Off we go for an adventure. No car. No petrol costs, no fears of head-on collisions, no worries about alertness and driver fatigue. We just all slouch together and enjoy the ride.

And here is the best bit. There is a licensed dining car! On the way back from one of the big cities to our north (Sydney) or South (Canberra or Melbourne), you can have dinner. And wine. My partner and I have a glass or two of red and the kids eat bolognaise. We eat some vegan thing. It’s sensational! No dishes.

If you don’t think the train is far better than driving, you are crazy!

We love it so much we have even taken the train all the way home from Melbourne city to our tiny village and it was easier than flying. No transfers. No check-in. We could walk around, as well as buy food and drinks. It was amazing.

For Christmas, guess what I am giving Basji? Yes, the piece de resistance. The maglev train. The floater. The right toy maglev train I found was on Amazon, but I have also seen it on other sites. Feel free to use my affiliate link above and get one for your little train lover.

It looks tricky to assemble. But we have music to sing while we do it. Take it away Blippi.

All across the country there are many train tracks

And many so trains that roll on through.

I can only imagine

how much fun I’d be havin’

if I were ridin’ in the caboose…