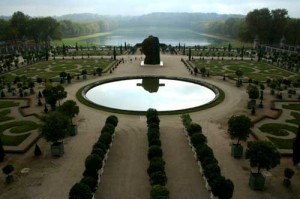 The ticket queues are long, but this is one of France\’s foremost tourist attractions. It’s a disappointment when—after grappling with my tripod through the Metro—I’m forced to surrender it at the security checkpoint.

Suitably frisked, I slip into the mood with the audio guide, which is more about the personalities and proclivities of those who\’d lived there and less about facts and dates.

Once inside, things get eerie. Visitors creep along a corridor cordoned off with velvet rope, opening onto successive bedrooms, libraries and music rooms. It feels a bit like Madame Tussauds wax works museum. And despite their grandeur, the beds look preposterously uncomfortable.

The good news is that with all the large windows, there is enough light to take sharp photographs without a tripod or flash. It\’s a real benefit since photography is allowed, but only without the flash.

Outside, I catch glimpses of the Park—a formal French-style garden by royal gardener, Andre Le Notre, who was an expert in architecture and painting as well as botany. 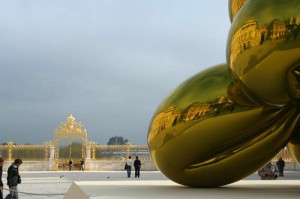 Stepping back into the afternoon air, a mirage-like vista spreads itself beyond the walls. A giant head faces into the mist, surrounded by manicured topiaries. Is it Buddha? Is it Shrek? Whatever it is, I’m impressed.

After feeling somewhat edgy in the confined space of the Chateau, getting into the park is such a relief.

The gardens seem to run to the horizon. The scale is monumental, breathtaking, intricately beautiful. I have a sense that it isn’t quite real. I’m within a period drama, and it just feels so right. Even despite my costume of scarf and denim jeans, the feeling of being in a film is enhanced by the baroque orchestra piped along the terraces and lake.

Louis XIV was apparently an artistic and creative person who had music accompany his every waking moment. Given that he wrote several versions of a book How to Present the Gardens of Versailles, it is no surprise that the experience feels deeply choreographed, from the precise cascading hedges to the timed eruption of fountains.

A brassy incongruous-looking sculpture by kitsch artist Jeff Koons was within the main courtyard when I visited late last year. The controversial exhibition included a giant shrimp, a pink room-sized poodle, and Michael Jackson and Bubbles sculpture. It will be a relief to many that it is now over.

Versailles is unarguably magnificent, but it could be seen as a monument to excess. Personally, I think the sculptures fit right in.

Every day except Mondays, French holidays and when official receptions are held

The Park is open daily.

Weekdays €20 (€25 on some Tuesdays of April, June, July and September)

Getting there from Paris

Versailles is 21 km south west of Paris. Take the RER ligne C from Montparnasse Station or the SNCF from Saint-Lazare to Versailles-Rive Gouche. It’s a short walk from there. Just follow the crowds.

You can hire a rowboat at the bottom of the park.

Strollers are not allowed inside and you’ll find there is no room for them anyway. Metal-framed child carriers are also not allowed. Or tripods.

Photography is allowed around the grounds of the Chateau and inside if you do not use the flash. If you don\’t know how to shoot without launching the flash, read your manual beforehand.