Australia has a very small population compared with other countries. If we are to remain competitive, we must use our entire population to look for talent.
David Gonski, Chairman Coca-Cola Amatil, Investec (Australia), Ingeus

I recently saw the short French film by Eleonare Pourriat, Oppressed Majority. It’s a tragicomedy and the premise is simple: a day in the life of a man who is experiences the same that a woman would. In an inverse flip on reality, women rule.

Our protagonist absorbs the subtle sexism he receives from condescending females, and the sexual jibes. He rides a bike to see his friend, who has been forced to shave himself, wear a head covering and is not permitted to leave the home.

He encounters sexist comments on the ride home and is yelled at for talking back. Seeing a group of females peeing in a lane, he stops to berate them, becomes surrounded, and is molested. At the police station, the female officer clearly does not want to believe his story because there were no witnesses, and questions the appropriateness of his clothing — shorts and casual shoes.

When his wife picks him up from the police station, having left a business meeting early, she soon twists the conversation around to how well her presentation went at work, and what the positive implications might be for her career.

If this film was a realistic portrayal, a gendered mirror of the scenarios depicted, it would be hard to see the point. These power roles are not only overt, in fact it is easier to deal with overt sexism than sexism in all of its subtleties, but deeply coded into our collective subconscious.

It’s such a problem that major companies, including Qantas, Westpac and the Commonwealth Bank of Australia, are conducting training of senior management in the war against it. Why? Because diverse workplaces are much more profitable.

Alan Joyce (Qantas CEO) says that diversity “allows you to tap into an unbelievable talent pool. If you don’t, you’re fishing in a very small pond.” 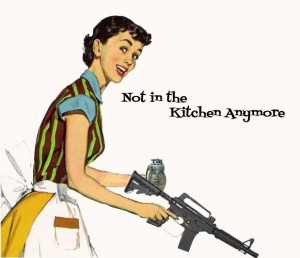 In the recent book by Tara Moss, The Fictional Woman, Moss describes a riddle you may have heard. A young man and his father are driving through the countryside when they have a terrible car accident. The father is killed, the young man is critically injured and flown to hospital. About to undergo theatre, the surgeon looks at him and says, ‘I can’t operate on this patient. This is my son.’

Moss asked a random number of people to solve the riddle, including a female medical student, and very few were able to provide the correct answer that the surgeon was his mother.

So deep is the codification of gender roles in our society that even current Minister for Education has said women would not be disadvantaged by the deregulation of the education system because they generally studied teaching and nursing where fees would be lower, and not law or dentistry, where fees would be higher. Even though the comments were factually incorrect, no doubt they will be dismissed by the Minister for Women, Tony Abbott, as a ‘gaffe’, rather than not the sackable offense that they should be.

A ground-breaking double-blind study by Yale researchers in 2012, unfortunately was able to prove that subconscious sexism exists in the workplace, and to a statistically significant level. Published in the Proceedings of the Academy of National Sciences, 127 lab scientists were given job applications for a lab manager position. The candidates had equal qualifications and experience, but one had a male name attached to it and the other a female name.

The ‘male’ applicant was deemed to be more competent, more hireable, and the scientists more willing to mentor them. The starting salaries offered were also different. No sexist reasoning was given by the recruiting scientists to justify the disparity, rather, they spoke of seemingly sound reasons like competence. These scientists were not all male, but female as well.

The problem is not just pay differences and employment opportunities, it extends into workplaces and all sorts of work-related social conversations.

A comment on Scienceblog describes what seems to be a common experience. When asked where she works, ‘Caro’ would say the name of the hospital, only then to be invariably asked, ‘Are you a nurse?’ Her female colleagues, also doctors, had experienced the same. Her male colleagues, however, would generally be asked if they were a doctor.

Perhaps there is something women in the workplace for which women can be grateful. I can certainly attest to this myself.

According to ‘Andrea’, you can speak up at meetings and have your idea ‘recreate’ itself anew in someone else’s mouth a few minutes later. It’s pretty amazing to discover you have the power of ventriloquism.